As I come to the end of my novel I find that the effort required to write is increasing exponentially in proportion to how close I am to the end.

All of the threads in the story are coming together and my mind is working overtime to hold all of them in place.

Plus, I have a fear that the story will not come to an organized end.

The last two scenes of The Tome of Worlds are an epic city siege of Koronan and an exhalation of sorts before the second novel begins. Even though I know how the battle turns and how the story concludes itself I find myself not wanting to put the protagonist, Aedinn Finn, into the fray.

These fears remind me of an awful story I wrote years ago called Threads of Time. I wrote the story during the summer of 1999 while I was working at Los Alamos National Laboratory.

I had just won an award for science fiction writing at MIT, and I thought quite well of myself, so I tackled a story I had wanted to write for some time on the question of faith–God, destiny, and all of that.

In Threads of Time, the protagonist, let’s call him George, started to have dreams about a place that existed outside of time. The place he imagined outside of time was a bar where notable figures from throughout history came and mingled with each other. Each person within the bar thought they were dreaming, but while they were there they were inspired to the achievements for which they became known.

Einstein was there. Newton. Hemingway. Gabriel Garcia Marquez, but that was not the point of the story. Threads of Time was about an approaching nexus. I went with the idea that every time we make a decision, two possible realities are created–one reality for each decision you could have made. With billions and billions of people throughout our history there would be an exponentially increasing number of threads in the human existence.

In Threads of Time a nexus approached where all of the threads created throughout human history were coming together to one point.

In Threads of Time George had to push the human race through the nexus through an act of faith.

I was hoping I could do the same with The Tome of Worlds.

Threads of Time was a good short story idea, but in the end I could not bring the story together.

Oh, I finished it. Wrote an ending, but the ending was not satisfying. The story was my attempt at dealing with my own questions about and issues with the subject of faith.

As you can see, I didn’t deliver.

If only I could dream of the bar, go there, and be inspired to finish the story.

Writing the penultimate scene as I wrote the rest of the novel, on faith and instinct, isn’t going to work, I realize. I have to organize the last battle, something I loathe doing, but I see no other way around attacking the problem.

Yesterday I drew a map of Koronan, which I had yet to do, because up to this point the only part of the story that took place in Koronan was the beginning when Aedinn Finn was imprisoned in Kol Uthera. He never went outside the Tower. 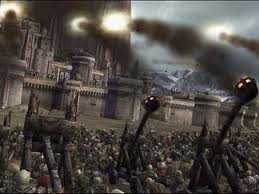 I needed a battle map, similar to the maps I used when I played Dungeons and Dragons and Mech Warrior with my D20 dice.

Up to this point I had avoided any advice on writing, because I’d had my fill of writing advice. I have stacks and stacks of writing books that I read long ago. The last thing I wanted to do was read another piece about writing, but I needed a nudge.

I came across this site on writing fantasy battle scenes.

The point of my rambling in this post is that even though I have well founded fears about the end of the novel the way to attack those fears is to just write. Just do it.

Even if I go back and scrap the entire final battle scene just write it.

I wish a bar would open in my dreams and help me finish the novel, but that’s not going to happen.

However, I will go to a real bar when the novel is done.

12 thoughts on “The Asymptotic Ending”